In early 1936, the then League President made his way to the Collingwood Town Hall to officially present the Magpies with the 1935 Premiership pennant. It was the fifth time in nine years he’d had to make such a journey, and the club marked the occasion by presenting him with a special silver tankard as a gift.

Now, more than 85 years later, that tankard has found its way back to the Collingwood Football Club.

The historic item’s remarkable journey began on the night of 4 March 1936, when the Magpies held their annual meeting at the Collingwood Town Hall. More than 2000 crammed into the space that night, a record attendance, and a further 500 had to be turned away.

The undoubted highlight of the evening was when Dr William McClelland, the President of the VFL, presented the club with the Premiership pennant they had won the previous October. He also presented the players with their official Premiership medals.

Collingwood President Harry Curtis accepted the pennant on the club’s behalf, and used the occasion to express the hope that football administrators would “fight hard for the stimulation of junior and schoolboy football” (the club had introduced its own schoolboy competition that year and was very proud of it).

Curtis then presented Dr McClelland with a superb silver tankard, illustrated with a Magpie sitting on a fence on one side, together with the words Floreat Pica, and an inscription on the other reading: 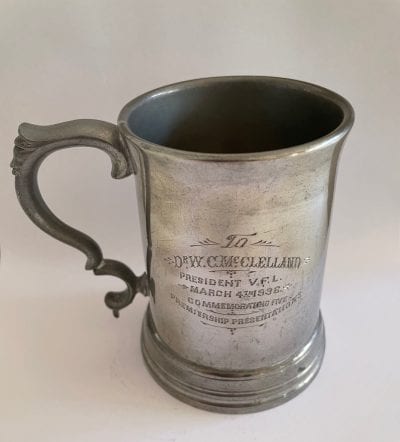 This little-known piece of Magpie history was then largely forgotten. More than half a century later it turned up in a Geelong antique store, where it was purchased by a casual collector of such items, Bill Smith.

Bill, himself a handy footballer who played with Geelong under-19s and reserves, has held onto it ever since, before recently handing it over to our Archives Committee.

Club Historian Michael Roberts said he hadn’t been aware of the tankard before researching it after Bill got in touch.

“It’s a highly unusual piece with a great story behind it. Mostly these sorts of items were given to the club, so to be able to reclaim one that we’ve given away is pretty special – especially when it relates to The Machine and the era just after. 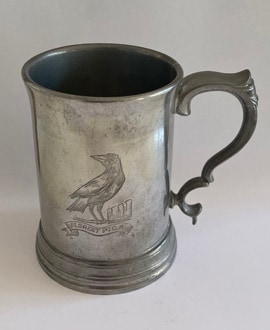 5 things we learned: Pies vs Power