VFL: Stevo fires in return game Skip to main content
Catchup on all the latest action from ${round}!
Previous
Next
Loading…
Watch every match live and on-demand...
Loading…

Electric Collingwood forward Jaidyn Stephenson has declared he can make an instant impact in finals after collecting 20 disposals in his return from a gambling ban via the VFL against Box Hill on Saturday afternoon.

In his return after serving what was effectively a 10-game ban for gambling, Stephenson spent much of the game on a wing, interspersed with stints up forward, and started on fire, collecting 10 disposals in a prolific opening quarter.

While he slowed down in the second half, a classy snap on his left foot for his sole goal of the day showed the talent the Pies will be keen to see in September. 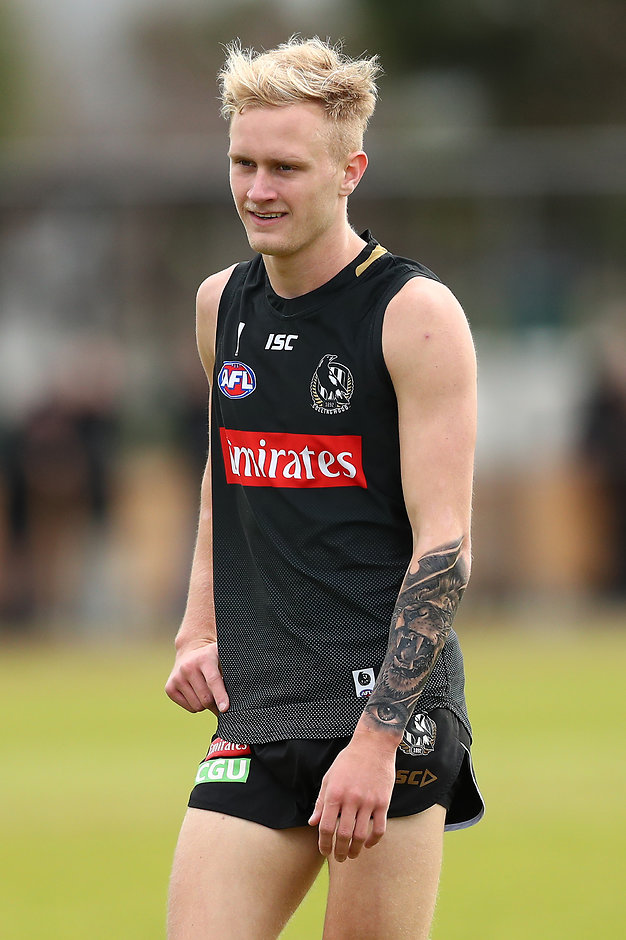 He was in the middle of a scuffle that saw his jumper torn, and Stephenson played out the rest of the game wearing No.12 instead of his customary No.1.

"I think I'm well prepared. Obviously the team's going really well so it'll be hard to get back in but if I do, I think I'm ready," Stephenson said after the Magpies' 19-point loss.

He was thrilled to be back.

"It is great running around. It's a bit harder than just running laps."

The 20-year-old's presence in the game was controversial after the AFL allowed him to play, despite expectations Stephenson wouldn't be able to play until this weekend ended.

However, the AFL ruled the senior team's Friday night win over Essendon was the 10th and final game of his suspension, so the 2018 NAB AFL Rising Star was allowed to feature in the seconds.

Another making a comeback was Brayden Sier, who was revealed by AFL.com.au to have played a game of local basketball earlier this month under the name 'Phill Inn' despite sporting a calf issue.

His day ended prematurely when he suffered a concussion in the second term.

Veteran Daniel Wells showed his class in his first outing since suffering a serious left knee injury against Sydney in May, collecting 18 disposals.

Defender Nathan Murphy impressed with his aerial ability but suffered a pinched nerve in his neck in the second half.

Meanwhile, fears abound for VFL captain Alex Woodward, who went down late in the game with a knee concern.

While the stretcher was called out, Woodward limped off the ground and had bandaging around a leg after the game.

With the result still in the balance, Collingwood coach Jared Rivers left the coaches' box to console the emotional onballer, who immediately headed down the race.

Alex Woodward looked emotional when he went off late after an incident on the far wing. Had bandaging on a leg after the game.

Woodward, who was delisted by Hawthorn at the end of 2016, has endured four knee reconstructions.

Josh Daicos was excellent for the Pies, racking up 36 disposals.

The Magpies went down after dominating the opening half but were made to rue their inaccuracy, while Box Hill opened up the margin late with a flurry of goals, posting a 11.10 (76) to 7.15 (57) victory.

Up Next Pies and Dons sound each other out ahead of finals
Why not share?
Share This Article

Pies and Dons sound each other out ahead of finals

According to AFL Media's Riley Beveridge, Friday night's clash with Essendon was such a game of poker Nathan Buckley and John Worsfold might as well have been wearing shades